habboin 22/07/2021 Rocket 1308
A Rocket Lab Electron rocket failed to reach orbit during a July 4 launch after a problem during the rocket’s second-stage burn.The Electron rocket lifted off from the company’s Launch Complex 1 at Ma...

A Rocket Lab Electron rocket failed to reach orbit during a July 4 launch after a problem during the rocket’s second-stage burn.

The Electron rocket lifted off from the company’s Launch Complex 1 at Mahia Peninsula, New Zealand, at 5:19 p.m. Eastern. The launch was originally scheduled for July 3 but pushed back two days because of poor weather in the forecast, only for the company to move up the launch to July 4 based on a reassessment of the weather.

The initial phases of the launch appeared to go as planned, although the vehicle’s passage through “max-q,” or maximum dynamic pressure, appeared to be rougher than what was seen in previous launches. Onboard video taken shortly before first-stage separation showed material appearing to peel from the rocket, although it was not clear if it simply a decal applied to the rocket or something more substantial.

The onboard video from the rocket froze about five minutes and 45 seconds after liftoff, or three minutes into the seconds stage burn. At six and a half minutes after liftoff, a launch controller on the company’s webcast of the launch said, “Initiating mishap response plan.”

Telemetry from the rocket, displayed on the webcast, showed the rocket’s altitude falling from about 194 kilometers to less than 165 kilometers for about 90 seconds before that information was removed from the screen. The company ended the webcast 11 minutes after liftoff, two minutes after the rocket’s second stage should have shut down and the kick stage, carrying its payload of seven satellites, deployed.

“An issue was experienced today during Rocket Lab’s launch that caused the loss of the vehicle. We are deeply sorry to the customers on board Electron,” the company tweeted about 25 minutes after liftoff. “The issue occurred late in the flight during the 2nd stage burn. More information will be provided as it becomes available.” 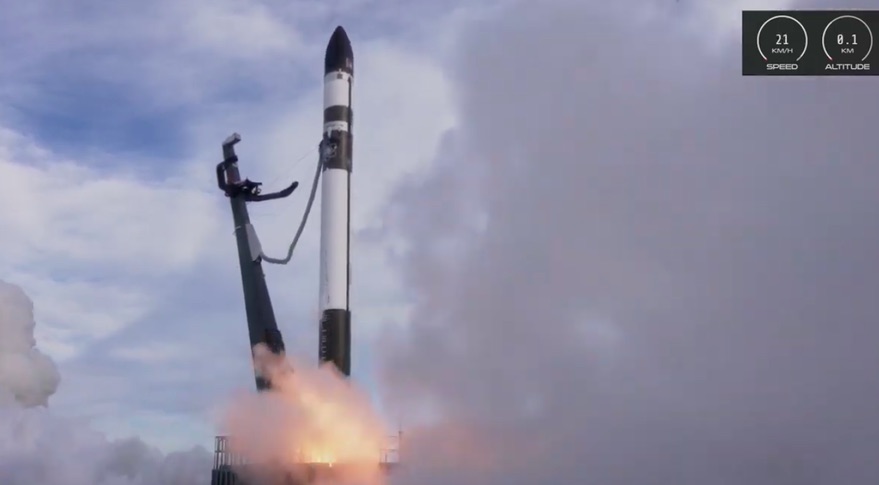 “We lost the flight late into the mission. I am incredibly sorry that we failed to deliver our customers satellites today,” Peter Beck, chief executive of Rocket Lab, tweeted after the failure. “Rest assured we will find the issue, correct it and be back on the pad soon.”

The launch was the 13th for the Electron rocket. The vehicle had 11 consecutive successful launches after the rocket’s inaugural launch in May 2017 was terminated because of a telemetry issue involving range safety systems, and not a problem with the rocket itself.

The primary payload for the launch was CE-SAT-1B, a 67-kilogram imaging satellite built by Canon Electronics, whose launch was arranged by Spaceflight Inc. The satellite, capable of taking images with a resolution of 90 centimeters, was intended to demonstrate the spacecraft’s technologies as the company prepared mass production of similar satellites.

“This launch is very critical for Canon Electronics as we are launching a satellite where we have remarkably increased the ratio of in-house development of components compared to the previous launch,” said Nobutada Sako, group executive of the Satellite Systems Lab at Canon Electronics said in a pre-launch release. Canon launched a similar satellite, CE-SAT-1, in 2017.

The rocket carried five SuperDove imaging cubesats developed by Planet. These satellites are upgraded versions of its original Dove line of cubesats, with additional spectral bands to support geospatial applications in fields like agriculture.

The seventh satellite on the Electron was Faraday-1, a six-unit cubesat developed by British startup In-Space Missions. The satellite is the first in a series by the company designed to carry hosted payloads. Faraday-1 included payloads for several customers such Airbus Defence and Space, which flew a payload called Prometheus 1 to test a reprogrammable software-defined radio.

After a halt in launch activity caused by the coronavirus pandemic, Rocket Lab had planned to ramp up its launch activity in the second half of the year. The next mission after this was to take place with an even shorter turnaround, Beck said in a June 18 interview. The company was also looking ahead to a first Electron launch from Launch Complex 2 in Virginia that, prior to this failure, was expected to take place before the end of the summer.