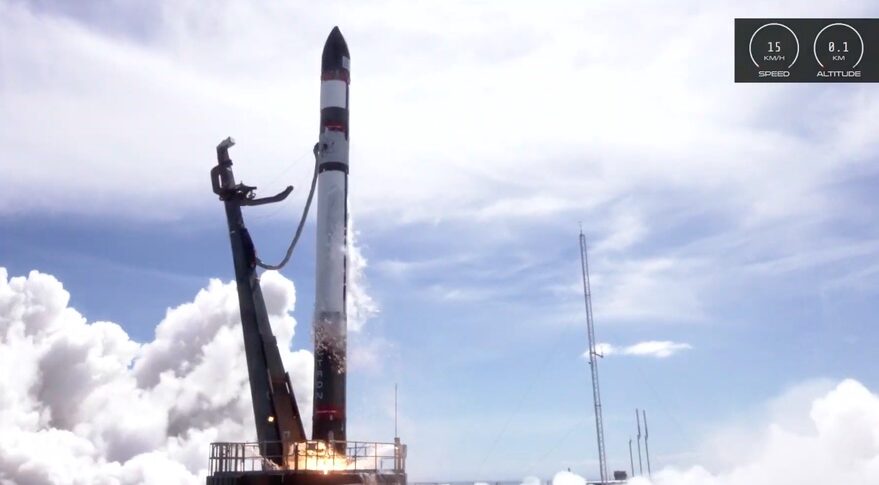 The Electron lifted off from Rocket Lab’s Launch Complex 1 on Mahia Peninsula, New Zealand, at 9:20 p.m. Eastern on a mission called “Return to Sender” by the company. The rocket’s kick stage deployed its payload of 29 smallsats into a 500-kilometer sun-synchronous orbit about an hour after liftoff.

Of greater interest to many, though, in the effort by Rocket Lab to recover the rocket’s first stage. The company announced Nov. 5 it would attempt to reenter the stage, deploy a drogue and main parachute, and then splash the stage down in the Pacific Ocean about 400 kilometers downrange from the launch site.

“This is an all-up combined test, a conclusion of a number of tests that we’ve been doing,” Peter Beck, chief executive of Rocket Lab, said at a briefing to announce its plan to attempt the recovery of the stage.

Initial indications were that the recovery demonstration went as expected, with the stage surviving reentry and deploying the drogue and main parachutes, Rocket Lab announced. Beck later tweeted a photo of the stage floating in the water next to a recovery boat, apparently intact and in good condition.

“What the team achieved today in recovering Electron’s first stage is no mean feat. It took a monumental effort from many teams across Rocket Lab, and it’s exciting to see that work pay off in a major step towards making Electron a reusable rocket,” Beck said in a statement after the launch.

Rocket Lab announced last year that it would attempt to recover and reuse the first stage. Beck had originally dismissed any attempt to recover the stage because of its small size, but became convinced that it would be possible if the stage could survive going through what he dubbed “the wall” of reentry, slowing down the stage enough that parachutes could then deploy for the remaining phase of the descent.

The company tested various aspects of the recovery system separately, including guiding two stages through reentry and conducting tests of parachute deployment. This flight, though, was the first attempt to put the components together, allowing the stage to splash down at a speed of about 10 meters per second.

“A lot of it comes down to just the mass and size constraints we’re dealing with,” said Matt Darley, recovery systems manager at Rocket Lab, during a company webcast of the launch. Fitting the parachutes, reaction control system and other equipment needed for recovery in the limited volume available within the first stage “was probably our biggest challenge.”

Rocket Lab will use a ship to pull the stage out of the water and return it to land, where it will be studied back at the company’s factory. Beck said they did not attempt to perform a mid-air recovery of the first stage using a helicopter — something the company has demonstrated in drop tests earlier this year — because they didn’t know what condition the stage would be in.

The company pursued recovery and reuse of the first stage to enable it to increase its flight rate without having to scale up its factory. “Even if we get to use the stage just another single time, it has the effect of effectively doubling production,” Beck said earlier this month. “Even one reuse is a really huge advantage.”

The recovery effort overshadowed the launch itself, the 16th of the Electron rocket. It placed into orbit 24 Spacebee satellites, each 0.25U in size, by Swarm Technologies. The satellites are part of a constellation of ultimately 150 satellites that will provide internet of things services.

The Electron also carried two satellites for Unseenlabs, a French company developing a constellation to provide radiofrequency tracking of ships. The DRAGRACER mission by TriSept deployed two smallsats, one equipped with a tether to test a technology that could shorten its deorbiting time from several years to as little as 45 days. The APSS-1 cubesat built by students at the University of Auckland in New Zealand will study the Earth’s ionosphere.

Besides the 29 smallsats, the Electron carried an additional payload: a 3D-printed titanium mass simulator 15 centimeters tall in the form of a gnome, dubbed “Gnome Chompski” after a character in the “Half-Life” series of video games. The gnome, which will remain attached to the rocket’s kick stage, was funded by Gabe Newell, founder of video game company Valve Software.