habboin 16/07/2021 Rocket 1212
Rocket Lab successfully launched a classified payload for the National Reconnaissance Office Jan. 30 in the first of up to a dozen launches planned by the company this year.Rocket Lab’s Electron rocke...

Rocket Lab successfully launched a classified payload for the National Reconnaissance Office Jan. 30 in the first of up to a dozen launches planned by the company this year.

Rocket Lab’s Electron rocket lifted off from the company’s launch site on New Zealand’s Mahia Peninsula at 9:56 p.m. Eastern. The launch, dubbed “Birds of a Feather” by Rocket Lab, was the 11th mission for the Electron rocket and its first launch of 2020.

“Starting our 2020 launch manifest with a successful mission for the NRO is an immensely proud moment for our team. It once again demonstrated our commitment to providing responsive, dedicated access to space for government small satellites,” Peter Beck, chief executive of Rocket Lab, said in a statement.

The rocket was carrying a payload for the NRO designated NROL-151. The agency procured the launch through its Rapid Acquisition of a Small Rocket, or RASR, program, which it started in 2018 to procure small launch vehicles responsively. This launch was the first under the RASR program.

Neither Rocket Lab nor the NRO released details about the payload, including whether it was one or more satellites or their purpose. Amateur satellite observers noted the mission appeared to be going into a high inclination orbit of about 70 degrees, but not a sun-synchronous orbit commonly used by Earth observation missions. 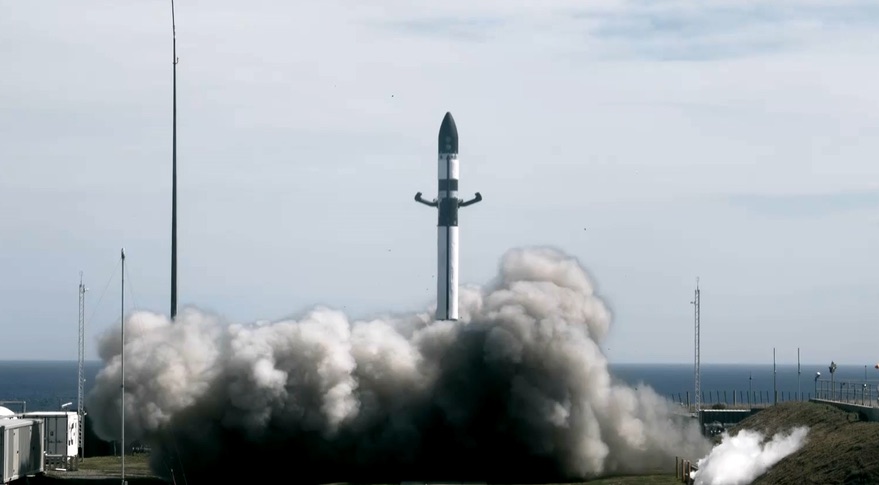 The NRO released a logo for the mission prior to the launch that drew comparisons online to those of the Milwaukee Bucks basketball team and Jägermeister liquor. The logo is adorned with good luck charms like a horseshoe, four-leaf clover and wishbone. The NRO said in a tweet that the logo was “a light-hearted way to wish #NROL151 good fortune & luck on its mission.”

Rocket Lab also used the launch to further its efforts to recover and reuse the Electron first stage. The company said that, was with the previous Electron launch in December, the first stage survived reentry and remained intact until it hit the ocean.

In a December interview, Beck said that, after this test, the company would “go quiet” for a few months in its reusability efforts as it makes another block upgrade for the rocket to incorporate parachutes and other changes for recovering the stage. “The next step is to splash it down into the water gently, and then the step after that is to recover it in mid-air with a helicopter,” he said then.

This launch was the first of up to a dozen the company expects to carry out this year. That will include the first launch from the company’s Launch Complex 2 at Wallops Island, Virginia. That launch, carrying a U.S. Air Force research and development smallsat called Monolith on a mission designated STP-27RM, is scheduled for the second quarter of 2020.

Rocket Lab is also building a second launch pad in New Zealand, which will be ready by late this year, the company announced in December. The company announced Jan. 14 it is constructing a new headquarters and factory in Long Beach, California, that will be able to produce 12 or more Electron rockets a year, while adding a second mission control center.

In addition to its launch vehicle efforts, the company is working on a satellite bus called Photon based on the kick stage of the Electron rocket. In a Jan. 29 presentation at the 23rd Annual Commercial Space Transportation Conference here, Shane Fleming, vice president of global commercial launch services at Rocket Lab, said that first Photon mission should take place this year. “We’re very excited to have our first Rocket Lab satellite on orbit,” he said.