Orbital ATK is developing a new intermediate to heavy-class rocket that could eventually compete with SpaceX and United Launch Alliance to launch national security satellites.

The recently merged rocketmaker, based out of Dulles, Virginia, won a $46 million U.S. Air Force contract as part of the service’s efforts to help wean itself from the Russian rocket engine used in launching most military satellites. Some of Orbital ATK’s new work will be used in ULA’s next-generation Vulcan rocket. But the Air Force said in a Jan. 13 announcement that the technologies, including a Common Booster Segment solid rocket motor, “are intended for use on an Orbital ATK next generation launch vehicle.”

Orbital ATK officials confirmed Jan. 14 that the company was studying a medium- to heavy-class rocket that would compete in the Air Force’s Evolved Expendable Launch Vehicle program. The new rocket, which does not have a name, would primarily be powered by solid motors, said Mark Pieczynski, vice president of business development for Orbital ATK’s flight systems group.

“Orbital ATK is evaluating concepts that utilize solid propulsion elements as the basis of an American-built, intermediate to heavy class family of EELVs capable of launching Air Force and other payloads,” Pieczynski said in an email. “The solid propulsion and propulsion elements we are developing under this agreement will help achieve low-cost assured access for current and future National Security Space launch requirements.”

Blue Origin’s BE-3 engine is the leading candidate to become the rocket’s upper stage engine, although Orbital ATK is studying other options as well, Pieczynski said. The BE-3 also is one of three upper-stage engines ULA is considering for Vulcan.

Congress has directed the Defense Department to develop domestic propulsion systems that would enable the Air Force by 2019 to end its reliance on the Russian RD-180 rocket engine, used to power ULA’s Atlas 5 rocket. 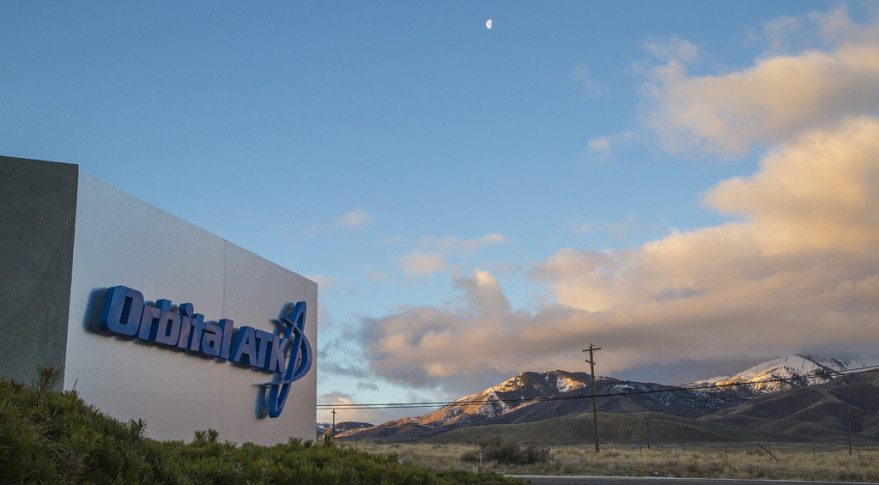 Before Orbital Sciences and ATK merged in February 2015, the two companies had considered independent and joint responses to the Air Force’s request for propulsion solutions. Both were long thought to have an interest in the national security market by industry and government officials. In 2014, ATK executives argued solid-rocket motors are a relatively near-term replacement and less expensive option than liquid fueled engines, despite a preference from lawmakers for a plug-and-play option to replace the RD-180.

With the Jan. 13 award, Pieczynski said Orbital ATK would spend much of its time in the next few months determining the optimum size of the solid rocket motors.

The base Air Force contract would cover qualification testing, structural testing and a critical design review in the first half of 2017. If the Air Force exercises all options, the contract could include a static fire test in 2018 and a test flight in 2019.

Orbital ATK submitted a letter of intent to the Air Force last year to start the certification process that would allow the rocket to launch national security payloads.

Pieczynski said the development of a certification plan, which includes how many successful launches the rocket would need before flying Defense Department payloads, would begin in the first half of this year.

If certified, the new rocket would compete with SpaceX’s Falcon 9 and Falcon Heavy rockets and ULA’s Delta 4 Heavy and Vulcan rockets. The Air Force and U.S. lawmakers have put a premium on having what they call “assured access to space.” By policy that would mean the Defense Department would have at least two providers to launch military and spy satellites.

The emphasis on assured access comes because Air Force leaders are concerned about a potential gap in future years. ULA has said it is retiring its Delta 4 rocket around 2018, leaving the company’s Atlas 5 rocket for medium-class missions to compete with SpaceX’s Falcon 9 rocket. However, the future of the Atlas 5 has been clouded by questions about the availability of the Russian engine that powers the rocket.

In addition, SpaceX’s Falcon Heavy rocket has yet to make its first flight, leaving ULA’s Delta 4 Heavy as the only heavy-class rocket available to the Defense Department.