Habboin 01/07/2021 Rocket 794
A new market for super high-speed weapons is fueling investments in rocket engine technologies as companies seek to gain an edge. The industry foresees a demand for advanced rocket engines, particular...

A new market for super high-speed weapons is fueling investments in rocket engine technologies as companies seek to gain an edge. The industry foresees a demand for advanced rocket engines, particularly if the U.S. military moves to acquire revolutionary missiles that fly at hypersonic speeds.

The Pentagon expects to invest $2 billion over the next five years in high-speed weapons including lasers and hypersonic missiles that travel at five times the speed of sound.

The future of missiles and propulsion technology is about going “further and faster,” Pat Nolan, vice president of Orbital ATK, told SpaceNews at the Association of the U.S. Army’s annual conference.

Orbital ATK has a hot production line for rocket motors that power some of the military’s most widely used missiles like the Hellfire. This week it is scheduled to deliver the 100,000th rocket motor to Hellfire manufacturer Lockheed Martin. Orbital is now testing a new model that has less sensitive propellant and will comply with military requirements for safer, so-called insensitive munitions.

Nolan said it’s hard to predict defense budgets in the current political climate but the industry does expect an uptick in demand, especially as the United States is challenged by rising military powers and seeks to deter attacks.

In the missiles area, “we see the need to add more energy, more distance,” he said.

Some hypersonic-weapon research and development programs are getting under way, Nolan said. “There is more activity today than there has been in a while.” 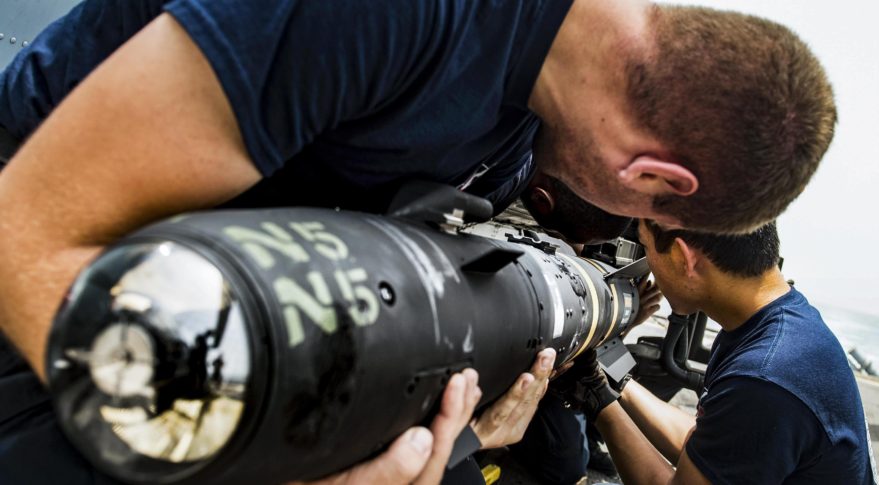 Higher demand for tactical rocket motors helps the company shore up weaknesses in the large rocket motor sector. Large solid propellant rocket motors are critical systems for the United States to be able to launch payloads into space or warheads in intercontinental ballistic missiles. The industry has been singled out by the Pentagon for being at risk following years of government budget cuts.

Nolan said Orbital ATK tries to spread investments across different types of tactical and strategic rocket motors. “The underlying chemical supply base is common to all.”

To keep the large rocket motor industry alive in the United States, both firms expect to manufacture engines for the replacement of the Minuteman 3 intercontinental ballistic missile, although production decisions have not been made yet.

“Orbital ATK seems to have secured a lock on most of the domestic demand for large solid rocket motors,” noted industry consultant Loren Thompson, of the Lexington Institute. Not only does it build solid rocket motors for all three stages of the Navy’s submarine-launched ballistic missile and the solid boosters to be used with NASA’s next-generation Space Launch System, Thompson noted, but it recently was selected by United Launch Alliance to build all the strap-on solids for the workhorse Atlas 5 space launch vehicle after 2019.

The solid rocket motor industrial base suffered a major blow when the space shuttle program ended. The shuttle consumed a great amount of the propellant work. “When that went away, there was a trough in the purchase of chemicals. Some companies exited the market,” Nolan said. These supply problems could affect the Minuteman III replacement program. “We need to work the underlying supply base.”

There used to be five manufacturers of rocket motors three decades ago, but the industry consolidated after budgets collapsed.

“Industrial base issues go way beyond the manufacturing of rocket motors,” said Nolan. Solid propellant comes out of a dozen specialty chemicals made by some companies that have left the market, he said. “There are many single source ingredients within the supply base today.”

The U.S.-based division of Norwegian defense and aerospace company Nammo makes tactical rocket motors in the United States, and is looking to expand its business as it sees the field of competitors shrinking. The company a year ago signed an agreement to produce rocket motors at the Navy’s energetics center in Indian Head, Maryland.