Home > Rocket > Guardians Of The Galaxy: Where Did Rocket Come From?

Guardians Of The Galaxy: Where Did Rocket Come From?

who plays rocket in guardians of the galaxy
habboin 24/11/2021 Rocket 1607
Guardians of the Galaxy introduced Marvel Cinematic Universe fans to a few of the comics' most bizarre characters, to overwhelming love and support. Among the fantastical sci-fi creatures, one stands...

Guardians of the Galaxy introduced Marvel Cinematic Universe fans to a few of the comics' most bizarre characters, to overwhelming love and support. Among the fantastical sci-fi creatures, one stands out as a wonderfully obscure, deceptively complex character; Rocket Raccoon.

Rocket Raccoon first made his way to the big screen in 2014's Guardians of the Galaxy, joining the ragtag team to save the universe. He reappeared in the sequel, played a substantial part in both Avengers: Infinity War and Endgame, and is set to appear in Thor: Love and Thunder and Guardians of the Galaxy Vol.3. He has been portrayed in each appearance by Bradley Cooper with motion-capture performance by Sean Gunn.

The Guardians of the Galaxy films have been light on details when it comes to the life of Rocket Raccoon. In the first film's prison lineup sequence, he is described as the result of illegal scientific experimentation on "lower life forms." The scene lists his rap sheet, planet of origin, and known associates. In the bar scene later in the film, he laments being torn apart and put back together repeatedly and Yondu echoes his pain in the sequel. Rocket is set to have a bigger part in Vol. 3. From the information in the films, the broad strokes of the character are made clear, but there is much more going on in his comic book origins.

The first appearance of Rocket was in 1982, but he actually had nothing to do with the Guardians early on. He first appeared in The Incredible Hulk vol. 1 issue 271, before going on to his own solo comic series in 1985. His name and aspects of his personality early on are a reference to a Beatles song called Rocky Raccoon. After his brief solo series concluded, he appeared sparsely throughout other comic series. Despite his current popularity, the character appeared in less than a dozen comics for the first 30 years of his existence. His best-known appearance and the one that saw him enter the MCU was his membership in the Guardians in their 2008 relaunch.

Rocket Raccoon is an alien raccoon granted sentience through scientific experimentation. He is arrogant, stubborn, aggressive, and impulsive, but is also one of the greatest mechanical and tactical minds in the galaxy. He comes from a planet called Halfworld, which was conquered by an alien race and used as a mental healthcare facility. The machines which ran the facility became self-aware and used their advanced technology to grant the surrounding wildlife cybernetic enhancements. These creatures were then expected to provide for the patients, but their machinations became more complex. Rocket's role on Halfworld was as a lawman, ironically

Rocket's solo series centers around a battle between hyperintelligent animals for the fate of the mental healthcare colony they were created to serve. It has since been altered various times, but at its core, the narrative is about Rocket defeating the power-hungry Judson Jakes and rescuing his girlfriend, an otter called Lylla. Through his resourcefulness and military skill, Rocket leads a successful battle to defend the colony he was created on. He even successfully "fixes" the patients of the planet, freeing the animals to move on. 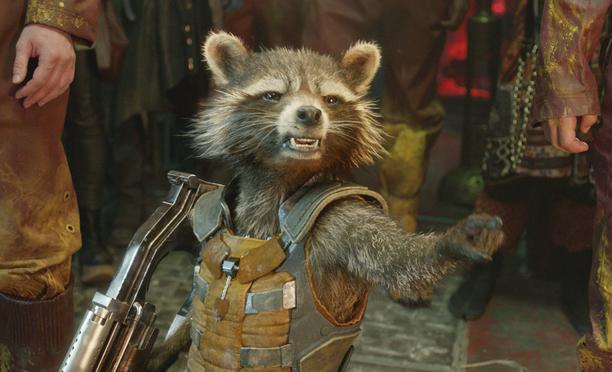 After the power struggle on Halfworld, Rocket and friends set out to explore the galaxy. Rocket's skills as a combatant and technician led him towards a life as a mercenary. In that life, he met his immediate buddy Groot and occasional boss Star-Lord. Rocket joined the Guardians at Star-Lord's request and actually named the team. At various times, Star-Lord has been absent and Rocket has taken over as leader of the Guardians of the Galaxy. Over various retcons and alternate versions, the character has finally found a place as a permanent fixture of the Guardians team.

These details are likely mostly canon to the MCU, with some changes to be expected. The animated Rocket and Groot series available on Disney+ has been clearly labeled non-canon, so the comics are still the main source to turn to regarding the character's backstory. The film does not need to establish every aspect of the character's life, the broad strokes put forth in the films sell the character fine, so fans may not have every question answered. The sparse details make sense with the established backstory and the comic details fill many of the holes that have been left open.

Rocket famously bristles at being referred to as a raccoon and does not seem to be aware they exist. In his comics origin, he is a raccoon, but an alien raccoon placed on Halfworld where he's never met another of his species. In the aforementioned lineup scene before the Guardians find themselves in prison, Rocket's home planet is listed as Halfworld and his only two known associates are Groot and his otter girlfriend Lylla. If Lylla is around in the film's universe, it's likely that the entirety of the battle for Halfworld occurred. When the audience meets Rocket in Guardians of the Galaxy, he has been working as a mercenary alongside Groot before he joins the Guardians at Star-Lord's request, much like in the comics. Rocket's origins are likely very similar to his comic book source.

Rocket Raccoon has been upgraded from a minor character appearing in only a handful of comics to a fan-favorite MCU mainstay. Rocket's origins are just as strange and fun as would be expected for a cocky gun-toting trash panda.

While fans wait on Naughty Dog as it continues working on multiple projects, a recent tweet from one of its animators gets people talking.