habboin 05/08/2021 Universe 1657
When certain stars collapse, they release overwhelming blasts of energy called gamma-ray bursts — the most powerful explosion in the universe. But the cosmic leftovers of these violent outbursts...

When certain stars collapse, they release overwhelming blasts of energy called gamma-ray bursts — the most powerful explosion in the universe. But the cosmic leftovers of these violent outbursts have been a mystery — until now.

Two new studies suggest that when gamma-ray bursts explode, some can leave behind black holes like graves, while others may end up as spinning neutron stars.

Gamma-ray bursts occur when some massive stars reach the ends of their lives and exhaust their supplies of fuel for nuclear fusion in their cores. Without the pressure from fusion pushing outward, gravity wins.

In the ensuing dramatic collapse, a flood of high-energy, short-wavelength gamma-ray light is released. They are sometimes associated with supernovas — another explosive way stars die — but are separate events.

One of the new studies found that for a certain class of the brightest, most powerful gamma-ray bursts, only black holes will do.

“We have focused only on the brightest and most extreme [gamma-ray bursts], arguing that the energy release from these events is too large to be powered by collapse to a neutron star (magnetar),” said study member Brad Cenko, a postdoctoral fellow from the University of California, Berkeley.

Magnetars are a type of neutron star, an object so dense its protons and electrons have merged to form neutrons. They are fast-spinning stars with extremely powerful magnetic fields. 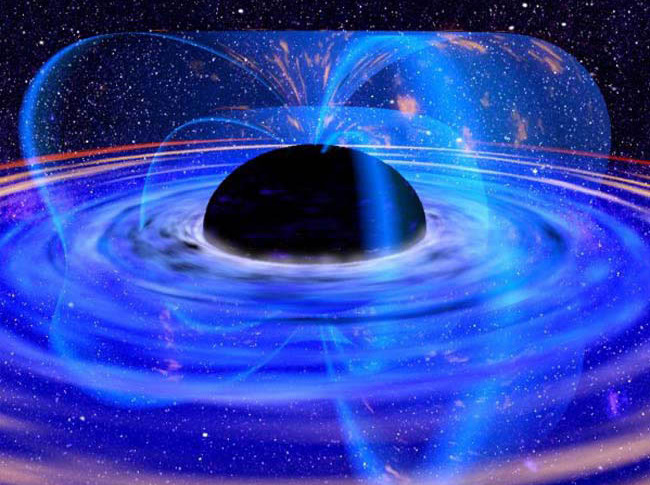 Neutron stars are restricted in how massive they can be — if they weigh more than a certain limit, then gravity would have collapsed the object further into a black hole. Black holes, on the other hand, have no upper mass limit, so can encompass any mass needed to power a gamma-ray burst.

This team used data from NASA’s Fermi spacecraft, which also observes in gamma-ray light. Originally known as the Gamma-ray Large Area Space Telescope, or GLAST, Fermi was launched in June 2008.

The two studies, both presented Nov. 17 at the Gamma Ray Bursts 2010 conference in Annapolis, Md., help clarify the story behind some of the universe’s most violent events. The scientists said their findings do not conflict with each other.

“Our results are certainly not mutually exclusive — we both are looking at relatively small sub-samples of [gamma-ray burst],” Cenko said.

Another group of scientists studied a sampling of gamma-ray bursts observed by NASA’s Swift gamma-ray satellite, which was launched in November 2004.

They found that 11 of the gamma-ray bursts bore particular signatures in the pattern of light they emitted that suggested a magnetar was present.

On top of that weirdness, magnetars have the added quirk of possessing extremely strong magnetic fields. And these city-sized stars are also spinning so fast they make a complete revolution within milliseconds.

Some researchers had thought magnetars would not be massive enough to produce the kind of energy required for a gamma-ray burst. But the new study suggests that at least some are.

“I think what our work shows is that magnetars are a viable model,” said Paul O’Brien of the United Kingdom’s University of Leicester, a member of the research team. “For this feature that we see, it’s very hard to see how you could do it for a black hole. It’s much more consistent with a magnetar model.”