habboin 03/08/2021 Universe 1295
&nbsp;Astronomers using the Hubble Space Telescope have peered further back in time than ever before, spotting a galaxy that formed less than 500 million years after the birth of the universe, making...

Astronomers using the Hubble Space Telescope have peered further back in time than ever before, spotting a galaxy that formed less than 500 million years after the birth of the universe, making it the oldest and most distant ever seen.

The find, reported Jan. 26 in the journal Nature, should help astronomers better understand the early days of the universe, researchers said. In particular, the discovery should shed light on the evolution of early galaxies, which first formed just a few hundred million years after the Big Bang.

“In essence, the most important aspect of this is, it provides us with some sense of how fast galaxies are building up,” said lead author Rychard Bouwens of the University of California, Santa Cruz (UCSC) and Leiden University in the Netherlands. “It provides a sort of measuring stick.”

Bouwens and his colleagues analyzed observations made by NASA’s Hubble Space Telescope. They looked at infrared data gathered by Hubble’s Wide Field Camera 3, which was installed on the telescope in 2009 during a space shuttle servicing mission.

The researchers found evidence of a galaxy with a redshift of 10.3, which corresponds to a distance of about 13.2 billion light-years.

That makes the newly discovered galaxy — UDFj-39546284 — the most distant known galaxy in the universe, beating out the old record-holder by about 100 million light-years.

Since the universe is roughly 13.7 billion years old, UDFj-39546284 was around nearly at the beginning — just 480 million years after the Big Bang, or when the universe was just 4 percent of its current age.

Officially, UDFj-39546284 remains a “galaxy candidate,” requiring some more observations to confirm its existence and age with certainty. But after performing a number of tests, Bouwens and his team are confident that the galaxy is there, and that its redshift is around 10.3.

“Everything we found was completely consistent with it being a real source,” Bouwens said. “It looks really good right now.”

In addition to studying UDFj-39546284, the researchers also looked at several galaxies that are slightly younger, dating to about 650 million years after the Big Bang. They saw dramatic differences between the older and younger galaxies, suggesting that the rate of star birth jumped by a factor of 10 in the intervening 170 million years.

“This is an astonishing increase in such a short period, just 1 percent of the current age of the universe,” co-author Garth Illingworth, also of UCSC, said in a statement. 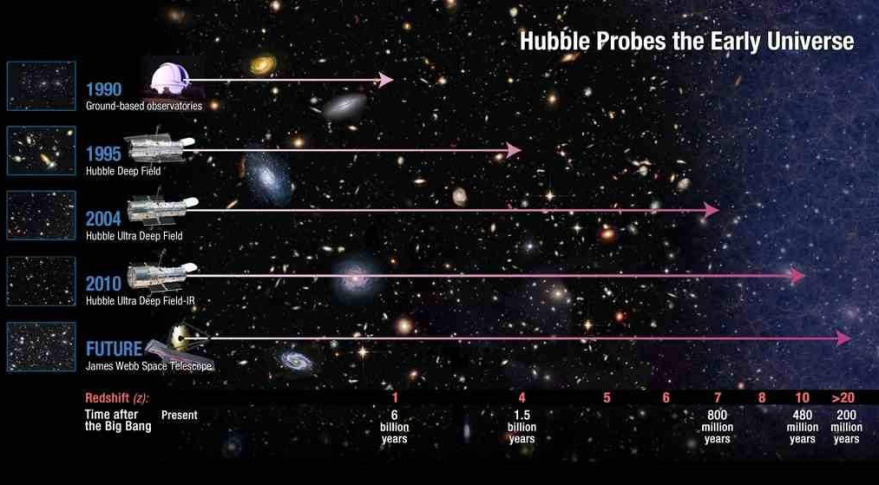 The team also found big differences in the number of galaxies observed in the two epochs. They discovered just the one galaxy dating to 480 million years after the Big Bang, while previous searches found nearly 50 galaxies just 170 million years later.

The new study also bears on an age-old question in astronomy. At about 300,000 years after the Big Bang, the hydrogen in the universe was neutral, meaning it carried no charge. By 1 billion years later, however, something had thrown off enough radiation to ionize most of this hydrogen, splitting it into its constituent electrons and protons.

“The results from this study imply that the stars and galaxies that they can detect would only provide about 12 percent of the radiation that you would need,” Rachel Somerville of the Baltimore-based Space Telescope Science Institute, who was not involved in the current study, told reporters Jan. 26. “So this is quite a mystery that needs to be solved.”

The new results hint that early galaxies such as UDFj-39546284 may have played a role in this re-ionization of the universe. But their contributions alone were perhaps not great enough to do the job, suggesting that some mystery source is also partly responsible, researchers said.

The team’s observations in this regard are not definitive. To get to the bottom of the re-ionization mystery, astronomers will need to gather more data, according to Bouwens.

Looking to the Future

While the new study takes an unprecedented look into the past, new instruments will likely be required to go back even further, to the first epochs of galaxy formation, researchers said.

One of the most promising future instruments is NASA’s James Webb Space Telescope (JWST), Bouwens said. The powerful successor to Hubble, JWST has long been hampered by cost overruns and delays.

Previously slated for launch in June 2014, JWST will be able to lift off no earlier than September 2015, according to an independent review panel convened last year to assess the telescope’s problems.

Whenever it is finally cleared to take to the skies, JWST will have a huge impact, Bouwens said.

“We’re now just able to scratch the surface of what will be possible,” he said. “We should be able to push out to redshift 12 or 13, and maybe further. It’s unclear what we’ll be able to do.”