Home > Universe > How Big Was The Universe At The Moment Of Its Creation?

How Big Was The Universe At The Moment Of Its Creation?

An ultra-deep view of galaxies many billions of light years away in the distant Universe.

You might think of the Universe as infinite, and quite honestly, it might truly be infinite, but we don't think we'll ever know for sure. Thanks to the Big Bang -- the fact that the Universe had a birthday, or that we can only go back a finite amount of time -- and the fact that the speed of light is finite, we're limited in how much of the Universe we can see. By time you get to today, the observable Universe, at 13.8 billion years old, extends for 46.1 billion light years in all directions from us. So how big was it all the way back then, some 13.8 billion years ago? Let's look to the Universe we see to find out.

The Hercules galaxy cluster showcases a great concentration of galaxies many hundreds of millions of... [+] light years away.

When we look out at the distant galaxies, as far as our telescopes can view, there are some things that are easy to measure, including:

These are very important, because if we know what the speed of light is (one of the few things we know exactly), and how intrinsically either bright or big the object we're looking at is (which we think we know; more in a second), then we can use this information all together to know how far away any object actually is.

Standard candles (L) and standard rulers (R) are two different techniques astronomers use to measure... [+] the expansion of space at various times/distances in the past.

In reality, we can only make estimates of how bright or big an object truly is, because there are assumptions that go into this. If you see a supernova go off in a distant galaxy, you assume that you know how intrinsically bright that supernova was based on the nearby supernovae that you've seen, but you also assume that the environments in which that supernova went off was similar, the supernova itself was similar, and that there was nothing in between you and the supernova that changed the signal you're receiving. Astronomers call these three classes effects evolution (if older/more distant objects are intrinsically different), environmental (if the locations of these objects differ significantly from where we think they are) and extinction (if something like dust blocks the light) effects, in addition to the effects we may not even know are at play.

The history of the Universe, as far back as we can see using a variety of tools and telescopes, out... [+] to the maximum present depth of SDSS.

But if we're right about the intrinsic brightness (or size) of an object we see, then based on a simple brightness/distance relation, we can determine how far away those objects are. Moreover, by measuring their redshifts, we can learn how much the Universe has expanded over the time the light has traveled to us. And because there's a very well-specified relationship between matter-and-energy and space-and-time -- the exact thing Einstein's General Relativity gives us -- we can use this information to figure out all the different combinations of all the different forms of matter-and-energy present in the Universe today.

But that's not all!

Our best measurements of the dark matter, normal matter and dark energy ratios in the Universe... [+] today.

If you know what your Universe is made out of, which is:

0.01% — Radiation (photons)0.1% — Neutrinos (massive, but ~1 million times lighter than electrons)4.9% — Normal matter, including planets, stars, galaxies, gas, dust, plasma, and black holes27% — Dark matter, a type of matter that interacts gravitationally but is different from all the particles of the Standard Model68% — Dark energy, which causes the expansion of the Universe to accelerate, 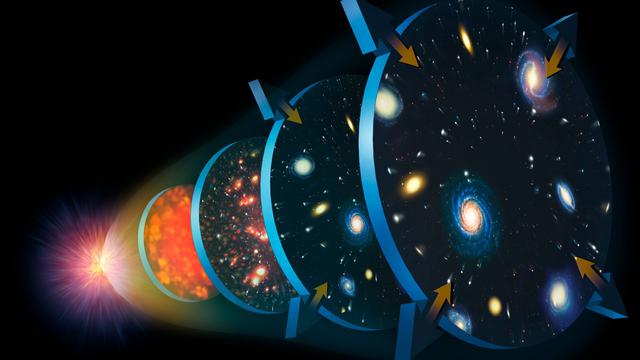 you can use this information to extrapolate backwards in time to any point in the Universe's past, and find out both what the different mixes of energy density were back then, as well as how big it was at any point along the way. Because of how illustrative they are, I'm going to plot these on logarithmic scales for you to view.

The relative importance of different energy components in the Universe at various times in the past.

As you can see, dark energy may be important today, but this is a very recent development. For most of the first 9 billion years of the Universe's history, matter -- in the combined form of normal and dark matter -- was the dominant component of the Universe. But for the first few thousand years, radiation (in the form of photons and neutrinos) was even more important than matter!

I bring these up because these different components, radiation, matter and dark energy, all affect the expansion of the Universe differently. Even though we know that the Universe is 46.1 billion light years in any direction today, we need to know the exact combination of what we have at each epoch in the past to calculate how big it was at any given time. Here's what that looks like.

Here are some fun milestones, going back in time, that you may appreciate:

If we want to, we can go back even farther, of course, to when inflation first came to an end, giving rise to the hot Big Bang. We like to extrapolate our Universe back to a singularity, but inflation takes the need for that completely away. Instead, it replaces it with a period of exponential expansion of indeterminate length to the past, and it comes to an end by giving rise to a hot, dense, expanding state we identify as the start of the Universe we know. We are connected to the last tiny fraction of a second of inflation, somewhere between 10-30 and 10-35 seconds worth of it. Whenever that time happens to be, where inflation ends and the Big Bang begins, that's when we need to know the size of the Universe.

The evolution of our Universe as we know it and see it takes approximately 13.8 billion years, where... [+] it evolved from a much smaller, hotter, denser state.

Again, this is the observable Universe; the true "size of the Universe" is surely much bigger than what we can see, but we don't know by how much. Our best limits, from the Sloan Digital Sky Survey and the Planck satellite, tell us that if the Universe does curve back in on itself and close, the part we can see is so indistinguishable from "uncurved" that it much be at least 250 times the radius of the observable part.

In truth, it might even be infinite in extent, as whatever the Universe did in the early stages of inflation is unknowable to us, with everything but the last tiny fraction-of-a-second of inflation's history being wiped clean from what we can observe by the nature of inflation itself. But if we're talking about the observable Universe, and we know we're only able to access somewhere between the last 10-30 and 10-35 seconds of inflation before the Big Bang happens, then we know the observable Universe is between 17 centimeters (for the 10-35 second version) and 168 meters (for the 10-30 second version) in size at the start of the hot, dense state we call the Big Bang.

Hospital Corpsmen 3rd Class Tarren C. Windham kicks a soccer ball with an Iraqi child. That soccer... [+] ball is approximately the size of the Universe we see today at the moment of its birth.

The smallest conceivable answer -- 17 centimeters -- is about the size of a soccer ball! The Universe couldn't have been much smaller than that, since the constraints we have from the Cosmic Microwave Background (the smallness of the fluctuations) rule that out. And it's very conceivable that the entire Universe is substantially larger than that, but we'll never know by how much, since all we can observe is a lower limit on the true size of the actual Universe.

So how big was the Universe when it was first born? If the best models of inflation are right, somewhere between the size of a human head and a skyscraper-filled city block. Just give it time -- 13.8 billion years in our case -- and you wind up with the entire Universe we see today.