10 Celestial Beings From The Marvel Universe Stronger Than Jiren

what universe is jiren from
habboin 27/12/2021 Universe 769
Dragon Ball Super's last arc, the Tournament of Power, featured a lot of strong mortals from all across the Dragon Ball Multiverse but none of them had the impact of Universe 11's Jiren. One of the Pr...

Dragon Ball Super's last arc, the Tournament of Power, featured a lot of strong mortals from all across the Dragon Ball Multiverse but none of them had the impact of Universe 11's Jiren. One of the Pride Troopers, Jiren was dubbed the strongest mortal in the multiverse, and with good reason.

Jiren's power level is far beyond human comprehension and thus, it is very difficult to compare him to anyone else. However, in the Marvel Comics, there are several celestial or cosmic beings who would give Jiren a run for his money if they ever come up against each other.

When Frank Castle aka The Punisher was given the Spirit of Vengeance by Mephisto, he landed back on Earth to see Thanos gone. He then met Galactus who made him his herald and gave him the Power Cosmic, thus giving birth to the Cosmic Ghost Rider. This version of Ghost Rider can do anything he pleases. He not only has the mythical powers but he also possesses the means to yield cosmic energy, making him an intimidating opponent to go up against.

Galactus has been running around in the universe since its inception, looking for planets to eat so that he can satisfy his endless thirst for power. Being a cosmic being, Galactus is telepathic, telekinetic, and he can manipulate matter, time, and energy, among other things. He is nigh-invulnerable and can also give others a part of his power (known as the Power Cosmic). While Jiren's energy signature might be up there with the very best, Galactus has a particular set of superpowers that Jiren just can't compete against.

Phoenix Force is another entity that has been around in the Marvel Universe for a long while. Its powers are endless, ranging from creation to destruction. The cosmic energy it produces is limitless, and the only problem is the fact that it has to rely on a host to use all of them efficiently. 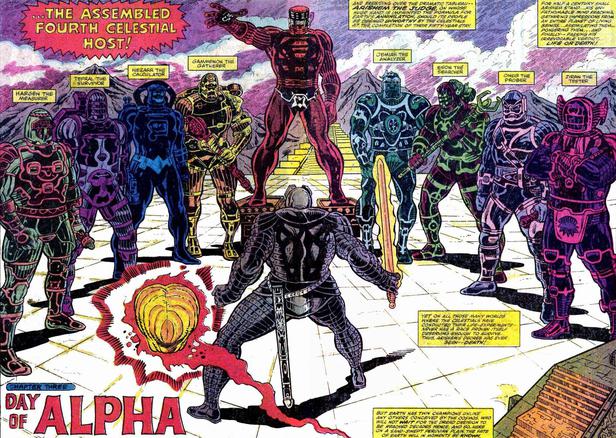 Jean Grey is one who has turned out to be a brilliant match for the Phoenix Force and if she was to be compared with Jiren, one has to say that her superpowers are beyond anything Jiren would have ever seen. Jean can easily break Jiren through her telepathic skills, and she wouldn't even have to touch him for that.

A being who has tried his hands on the Infinity Gauntlet, Adam Warlock's powers are unmatched in the Marvel Universe. He has something very unique called the Soul Immunity that protects or shields his soul against magic of any kind. Warlock is also immortal and can manipulate matter, among various other things. Jiren might be able to come close to his power without the Infinity Gauntlet, but if Warlock bears the Infinity Stones, then he is unbeatable.

Oblivion is one of the entities that came into existence as soon as the Marvel Universe was born and it is a sibling to Eternity, Infinity, and Death. Its responsibilities are similar to that of Death as Oblivion oversees all of those who die due to unnatural means caused by the universe. Oblivion is a cosmic entity, meaning it has limitless cosmic energy and it is immortal. It can also think anything into existence. Jiren cannot touch Oblivion with his power level.

Abraxas is a cosmic entity that was born the day the Marvel Universe split into a Multiverse. This entity is so strong and powerful that Eternity had to derive new ideas to stop its existence. Abraxas is the definition of destruction. Its whole purpose is set to reign terror upon the universe. The reason Galactus was given birth by Eternity was to counter Abraxas but even that couldn't stop it from doing what it wants. Jiren isn't as strong as Galactus, so how can he measure up against an entity like Abraxas?

Another entity that has existed since the creation of the universe, Death has all the cosmic energy it needs to manipulate time and space. It is sinister in the sense that it led Thanos down the killer path.

Thanos became obsessed with Death, going as far as killing his offspring. Death oversees the dead of the universe and it is the exact opposite of Eternity. Jiren is more likely to get manipulated by Death rather than overcome her powers.

The Beyonder's existence is singular in the sense that he doesn't exist in any alternate realities. There is only one Beyonder and its capabilities are beyond anything any cosmic being on this list can even begin to contemplate. Beyonder can manipulate the universe at his will, and on top of that, it is part of the reason why Doctor Doom arguably became Marvel's best villain. It once also pitted Earth's best superheroes and villains against each other, thanks to the otherworldly manipulation tricks.

The Living Tribunal is a cosmic entity that looks after the multiverse. He oversees all the happenings and tries to prevent the unfortunate things from ever taking place. Its full powers are unknown but considering that he is above the likes of Eternity, Death, and Oblivion, it wouldn't be wrong to believe that he is very strong. The only piece of his existence that can be found on Earth is the Staff of the Living Tribunal that is currently in possession of Karl Mordo in the MCU.

Marvel's version of God, One-Above-All's existence is not a secret but his powers sure are. It is known to be the creator of all life and The Living Tribunal is believed to be working for it. In reality, the whole universe works for One-Above-All and it can tinker the whole world to the way it wants. Jiren cannot be mentioned in the same breath as One-Above-All, although Zeno from the Dragon Ball Universe might have a few things to say about this.

NEXT: Is Goku Stronger Than Jiren? (& 9 Other Facts About Their Rivalry)