who plays rocket raccoon
habboin 18/12/2021 Rocket 1422
There is no Marvel Cinematic Universe character like Rocket Raccoon. In fact, much like the Highlander, there can be only one, and that "one" is Rocket. Bringing a tiny, otherworldly trash panda to li...

There is no Marvel Cinematic Universe character like Rocket Raccoon. In fact, much like the Highlander, there can be only one, and that "one" is Rocket. Bringing a tiny, otherworldly trash panda to life is no mean feat, one that only a skilled actor could pull off. We should all be thanking our lucky stars that Bradley Cooper has taken on the role of Rocket because, much like Liam Neeson in Taken, he possesses a unique set of skills that allows his play a range of wide characters. For my money, Cooper's performance as Rocket is one of the more undervalued performances in the MCU and in his career. It's the kind of sneakily incredible role that stands out in an actor's body of work. Cooper's handling of Rocket has me thoroughly convinced it's his best performance he'll ever commit to film. And, because today is Cooper's birthday, we're gonna talk about it! At length!

There are notable similarities between Rocket and Cooper that make the latter primed to play the former. Both Rocket and Cooper aren't afraid to experiment. For Rocket, it's often experimenting with dangerous machinery to see what explodes first. For Cooper, it's experimenting with the kinds of characters he plays and test-driving different methods to yield an authentic performance. (See: his physical and vocal performance as Jackson Maine in A Star Is Born, which is unlike anything he'd delivered to date). At his core, Rocket is a lovable wiseguy, a supporting team member who makes the most of his time in the spotlight. Like Rocket, Cooper can easily slip into "lovable wiseguy" mode when he's inside of a character and even offscreen, in his public appearances.

Cooper, like Rocket, also has some familiarity with spending a decent amount of time in "supporting cast member" mode. It took a longer amount of time for Cooper to ascend to leading man status and get roles in prominent projects. In the decade before his major breakout — 2009's The Hangover — Cooper's career was littered with misses (e.g. The Midnight Meat Train), short-lived TV stints (e.g. Jack & Bobby, Kitchen Confidential), and the occasional cult or mainstream hit (e.g. Wet Hot American Summer, Wedding Crashers). Despite having the training and resumé and conventional good looks to boot, Cooper has had to prove himself repeatedly, reminding viewers of the many skills he has as an actor — like the ability to move comfortably between drama and comedy. Post-2009, that has luckily become less and less of an issue as his star has risen. Then again, it's brought in a new concern for Cooper: What course does he want to take with his career when he has the luxury of choosiness?

This is where the genius of Cooper joining Guardians of the Galaxy comes into focus. On one level, one can understand the allure of an MCU-sized paycheck. But the Guardians of the Galaxy is way more than just a paycheck kind of movie; it's a gamechanger in every way. This is a movie that would change the energy of the MCU forever if it was a success. (The existence of Guardians of the Galaxy: Vol. 2 and plans for a third movie tell us it was.) With James Gunn on board to direct and the promise of a movie so visually, linguistically, and aesthetically unlike any previous MCU movie before it, the appeal to join Guardians was likely an irresistible opportunity for a chameleon like Cooper. What Cooper does as Rocket is, to put it maturely, coo-coo-bonkers-bananas. It is magnetic. It is electric. It rough and rowdy. It is lived in. It makes you forget that you're listening to Cooper, star of The Words. Because Cooper's performance is restricted to his voice (Sean Gunn is the physical stand-in/performer for Rocket while on the set), he has to get creative in his choices, but the character provides a lot of material to work with. 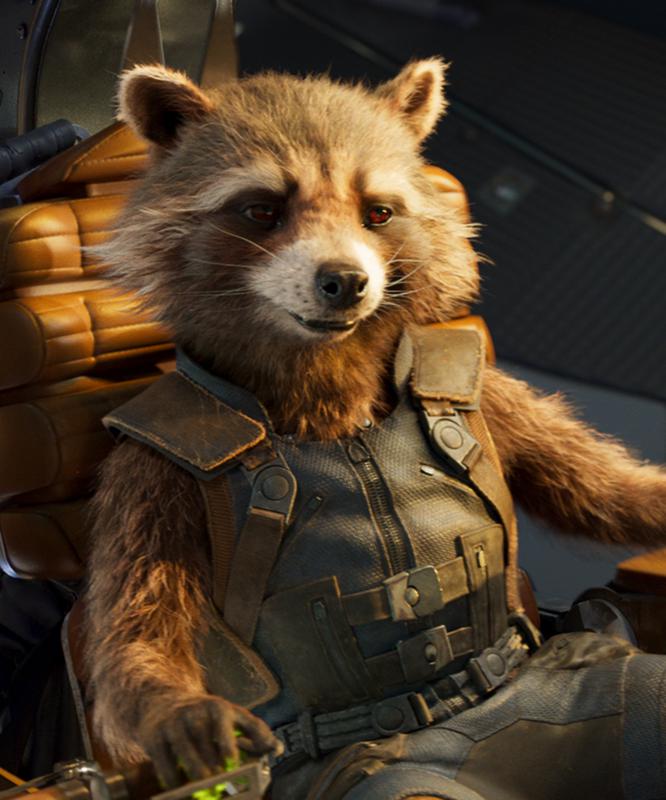 Rocket is a complicated character. He bears the scars of a life where he was experimented on before escaping and running amok all across the galaxy. He's got the voice of someone who's lived hard and hurts even harder. The fatigue sits behind a thin veil of bravado with Rocket and sometimes, when he speaks, that veil flutters and for a brief moment, the two qualities entwine. Sure, Rocket looks like a raccoon but to think he is just an animal would be to severely underestimate him. Aspects of who Rocket is can be found in a variety of Cooper's previous characters: The overwhelming pain of Pat in Silver Linings Playbook. The cockiness of Sack Lodge in Wedding Crashers. The childish antics of Phil in The Hangover. Even — I can't believe I'm saying this — the nobility of Avery in The Place Beyond the Pines. From here, the choices Cooper makes to play Rocket in the first two Guardians movies only make the grounded, tough-on-the-outside/soft-on-the-inside performances in Avengers: Infinity War and Endgame richer, better, more rewarding for fans.

These traces of emotional connective tissue are pivotal for the voice Cooper fashions for Rocket. The other pivotal aspect is the inspiration behind the voice, which Cooper revealed during a 2017 interview on The Ellen Show: "I came with [Rocket] much more like Daniel Plainview. I don't know if you know this but Daniel Day-Lewis' character in There Will Be Blood. And [Gunn] was like, 'No, I don't think so.' So we started to do this, it was like Gilbert Gottfried meets Joe Pesci, that's sort of what we came up with. It just kind of started like that."

It's not just the choices and quality of Cooper's voice that make his Rocket performance a perfect work of art — it's also the amount of physical work he puts into performing Rocket. Behind-the-scenes B-roll from the making of Guardians Vol. 2 reveals just how physical Cooper could get during different line readings. He throws his entire body into his lines, squirming and snarling and twisting, inflecting his voice with a near-feral quality. At the start of the clip, Cooper reads a line, then immediately does a seamless second take on it. He makes minor tweaks to the way his voice rises and falls, changing the intention behind Rocket's words every time. It's a brief but revealing moment that illustrates how comfortable Cooper is with playing Rocket to the point that he knows how to play around without straying too far from the character's essence.

The best of everything Cooper can do as an actor is rolled into Rocket. Be it his tendency for soulfulness or hamminess or swagger, it's all within Rocket. Miraculously, Cooper is so damn good at his job that he's able to bring all of that to life through his voice. Cooper's performance legitimizes Rocket, a character who could be easily overlooked in an MCU line-up. His performance demands you notice and listen to this character. Rocket Raccoon is unlike any character Cooper has ever tackled before or since the first Guardians movie; the MCU and his career are all the better for it.