how to build a bottle rocket
habboin 21/01/2022 Rocket 1154
ObjectiveBuild a water rocket out of plastic bottles that launches and stays aloft for as long as possible.MethodA bottle rocket is a 2-liter soda bottle containing a small amount of water and compres...

ObjectiveBuild a water rocket out of plastic bottles that launches and stays aloft for as long as possible.

MethodA bottle rocket is a 2-liter soda bottle containing a small amount of water and compressed air that propels the rocket upward when released from the launch platform.

Many strategies exist to reach greater heights and slow the rocket's decent to make the time aloft much longer.

Water Rockets are made from 2-liter soda bottles and can be as simple as an empty bottle or embellished to include fins and even a parachute. At the campout in April we will launch the water rockets that the boys have made and brought with them.

Water Rockets can go extremely high dependent on the amount of water in the chamber, the pressure, the weight and the aerodynamic stability of the rocket.

Start with a 2-liter soda bottle. Don't use a water bottle; soda bottles are built to withstand greater pressure. Take off the wrapper. It's very important that you do not cut the plastic of the bottle at any time during construction so be careful when taking off the wrapper.

You can decorate your rocket any way you would like. Some paints might work but they must be flexible as the bottle will expand and contract quite a bit under pressure and during launch. I have found Sharpie markers to work well. You could also decorate a piece of paper and then tape the paper to the rocket with clear packing tape.

You can be finished with your rocket at this point if you would like. However, an empty bottle like this is not aerodynamically stable. Once the water is gone the bottle will cease to fly in a straight line and will flap around like a leaf. It will still make a big noise and go high, but not as high as it could.

Fins can be added to make a Rocket aerodynamically stable. A stable rocket continues to fly straight and gain altitude long after the water is gone. 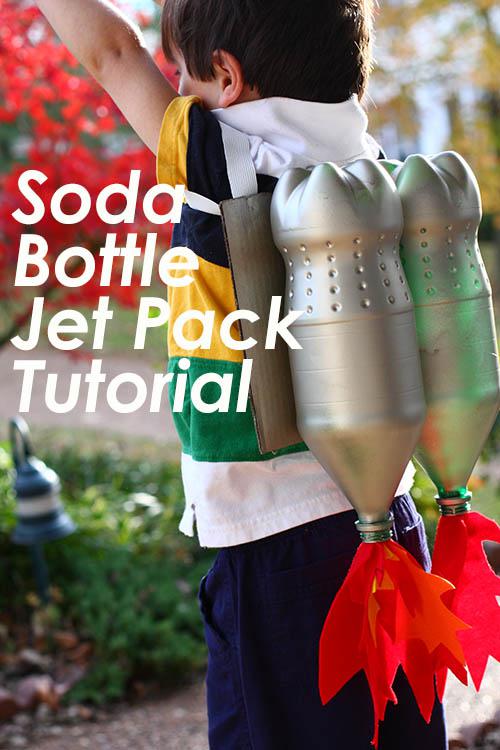 Fin MaterialI have found Foam Core (or Foam Board) to work very well. It's the material used to provide backing to pictures before framing. It's light weight, easy to cut, rigid and inexpensive. You can find it at most art supply stores. I buy it from Jo-Ann's or Dick Blicks.

Fin PatternsI've included the fin pattern for the white fin rocket here. It has worked very well but feel free to come up with your own design. Because of the design of the launcher the fins can extend behind the rocket as much as 8" without interference. A plastic sleeve must be able to fit around the neck of the bottle so make sure there is at least an inch clearing around all sides of the neck.

Adhesion TechniquesClear packing tape works well but I find it difficult to work around the curved parts of the bottle.

Several glues have also worked very well. PL Premium Construction adhesive (a polyurethane based glue), or E6000. Both are available from hardware stores. The problem I have with these is that they take time to dry but they are very strong.

For me the easiest was Hot Glue. It's important to use a Low Temp glue and gun. A high temp glue gun can melt the bottle. You may find that even a low temp glue gun will warp the plastic of the bottle but don't worry, it won't weaken the plastic.

Fill the bottle with cold water. With fine sandpaper lightly rough up the area to be glued. Apply the glue to the fin material and then attach the fin to the body of the rocket. This technique works great because the glue dries very fast, the weight of the water provides some stiffness to the bottle while attaching the fins and there is no warping (again, slight warping of the bottle with low temp glue will not affect the strength of the bottle).

Glue the fins to the rocket trying to keep them as straight as possible.